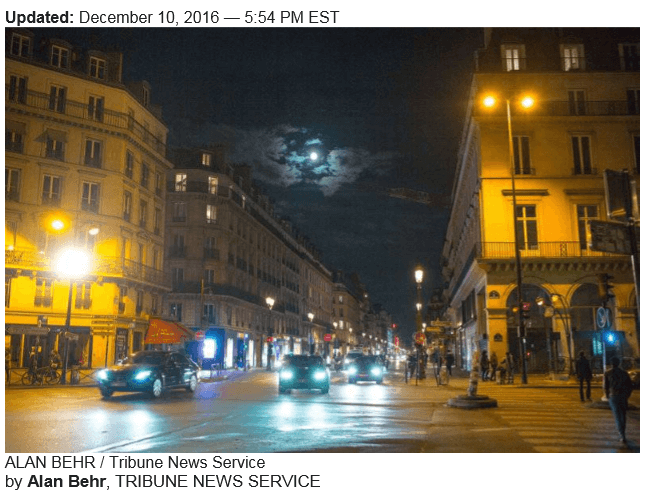 Paris is a moveable feast.

-Ernest Hemingway
When we are young, we travel to see the world, afterwards, to make sure it is still there.

I arrived back at the Hotel Plaza Athenee for a soothing lunch in the clubby, chair-filled corridor of the freshly remodeled lobby. The previous month, when I was in New York, a
bomb had gone off on a block I regularly walk. Paris, which I visit often, and the city of Nice, where I had spent summer holidays, had just come through a spate of terrorism.

You would not know it at the hotel: The lunch was as good as always, and everyone in the corridor was as relaxed as I remembered them; at the old hotels that have retained their greatness, you either keep running into the same people or imagine that you have.

Paris is my favorite destination in the world. I was not going to have the lifelong pleasure of being there taken from me. On foot, and later by Metro, I took my usual Parisian route, down the fashionable Avenue Montaigne, then across to the ChampsElysees. I dodged the cars that race through the Place de la Concorde like atoms through an accelerator, at last to inject myself bodily into the foliated womb of the Tuileries Garden. Tourism may be down, but I was greeted there by a chorus of foreign voices assuring me that my love of Paris and determination to show solidarity with the Parisians was not unusual. Buoyed by the unspoken companionship of strangers, I pushed on.

At the end of the garden, I descended the glass pyramid that sits contemplatively, as though in the lotus position, in front of the Louvre. I was soon at the Mona Lisa – which you reach by waiting for about 30 others in front of you to finish taking their selfies with the most famous painting yet made. To capture the moment, fellow art aficionados will ignore a dozen or so masterpieces that have altered art history and that are just steps away in either direction.

I enjoyed quiet moments with those companion works before leaving through a gift shop. A subterranean shopping mall, the Carrousel du Louvre, extends from under the pyramid, and it’s where I recaffeinated before heading east.

By the time I reached another stop for gifts – 20 Sur 20, a small shop selling costume jewelry of the last century – I could hear shouts in the distance. There was a rally going on in a square just beyond: a demonstration for transsexual rights.

The district of Le Marais, once stalwart and Jewish, now trendy and gay, awaited. I entered the Mariage Freres tea shop as though it were a shrine. I ignored the cliched French music piped in for tourists and took a seat at my usual spot in the crowded cafe in the back and ordered a pot of Darjeeling Bloomfield. In the shop in front, I bought about three pounds of leafy ambrosia, in different varieties, to take home. The bilingual manager, pleased with my enthusiasm, wrote on the label of each small black bag the correct steeping time, water temperature, and weight of tea in grams per 25 centiliters of water. In Paris, protests may flare, traffic may snarl, and barbarians may try to shoot up the place, but the culinary arts are pursued inviolate.

The next day, another personal tradition took me to lunch at Market, Jean-Georges Vongerichten’s only Parisian restaurant. It’s dedicated to specialties featuring market produce, and the decor is minimal, but the dishes are always innovative and fresh.

The newish Fondation Louis Vuitton is at the other end of town, but a shuttle bus serving it leaves from just outside the the Arc de Triomphe circle – or so I was told. Others had been told the same, and we got to know one another rather well while waiting for a white shuttle bus that never arrived. I summoned an Uber and invited the first three people who could understand me to share it. But we got nowhere because the circle was surrounded by police barriers necessitated by another protest, the origins and purposes of which were never revealed.

Relying on the Metro, I arrived a bit late for my rendezvous with a Parisian friend and colleague; together, she and I strolled through the museum, its jagged Frank Gehry frame gently glowing in shades of fuchsia, blue, green, and more provided by transparent panels installed by artist Daniel Buren over many of the 3,600 sheets of glass panels on the walls and roof. It was as though a Gothic cathedral had been reinterpreted as contemporary architecture.

I treated myself to dinner at Le Celedon. The waiter chatted with me quietly in English and German between serving a table where a couple from the Midwest were being chatted up for commercial purposes by a dapper American businessman. I had a dessert of exotic fruit with papaya sorbet and meringue, and made an early night of it.

At an art fair at the Grand Palais, two floors were filled with galleries of contemporary art, much of which I struggled to understand. That is disquieting because, as a member of the Association Internationale des Critiques d’Art on Paris, my job is to explain contemporary art. I had better luck within the industrial-looking Centre Pompidou – the once-daring fortress of modernism that has started to take on a familiar period look. Featured was a marvelous retrospective of the surrealist works of Renee Magritte.

In a rainstorm, I made it to the Metro stop for the Opera Bastille in time for a quick dinner and a performance of Tosca. One of the unwavering delights of opera is to hear so many rather ordinary-looking people sing their joys and sorrows in full voice, then either kiss or draw a knife. For a touch of the familiar, the diva’s character will perchance commit suicide, which (spoiler alert) is the fate of Floria Tosca. Productions may differ, but the music is always familiar; grand opera is international cultural comfort food. I munched happily on Puccini all through the evening, exchanging opera trivia with my seatmate, a young woman from Moscow.

E-cigarettes are the trending bad habit in Paris. You see many middle-age people sucking on them, all looking quite grim, as others strain to ignore them. Food tastes better to me without all that wafting nicotine. That is especially true in rooms filled with stuffed chairs, which, in the days before clean-air laws, acted like vitrines for the collection of stale smoke. They are all over the living-roomlike setting of La Pagode de Cos, in the new La Reserve hotel, where I met a friend for a gourmet lunch she had booked for us.

Ducking smoke as though dodging a gas attack is also no longer necessary at classic pastry-centered restaurants, such as Angelina, the landmark on the rue de Rivoli, where
another Parisian friend and I met for the obligatory afternoon drop-all-for-chocolate break – on her wise recommendation. As has surely been going on here since the turn of the last century, tourists and locals waited patiently for tables. The offerings are still marvelous and still redoubtably Parisian.

Bismarck’s army once laid siege to Paris, and after he got hold of it, Hitler futilely ordered the whole city burned. Paris has seen toughs come and go. That has never stood in the way of essentials such as my Mont Blanc pastry, its meringue center waiting to be given light as I spooned my way through the chocolate ball around it. I left Angelina ready for just about anything.

For the next couple of days, I was kept busy with business – at the legal conference that had brought me here. Over lunch on the first day, a woman chairing a panel asked me to fill in after a cancellation. That is how I had the Hemingway moment that all writers dream of having, sitting in a cafe on the Ile de Cite, scribbling out my portion of the outline. And that is how I made my debut speaking on the topic “Women in the Law” as the only man on an international panel of seven.

That evening, I had my final dinner in Paris. Robert, a friend since high school, now lives as a tax exile just across the border, on Lake Geneva in Switzerland. We met at the Left Bank apartment he maintains with his girlfriend and emptied a bottle of 2005 Pichon Longueville Comtesse de Lalande and then had dinner at a neighborhood restaurant that had a particularly fine kitchen.

Night had settled over Paris, and the city had switched to that unhurried nocturnal sophistication that it does so well and that New York, with its worship of business and with its boastful anxiousness, cannot seem to master. Robert charmed the waitress in French. At a nearby table, a young couple purred quietly together. Faint footfalls sounded through the emptying street. As a taxi pulled me away, church bells sounded the waning day’s penultimate hour.