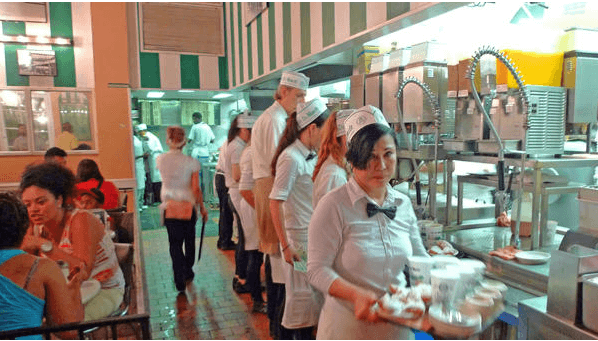 NEW ORLEANS -On Bourbon Street, stout men in narrow-brimmed hats strummed loud music from bars on opposite sides of the street, battling for the attention of passersby. Neatly dressed touts fanned out from strip-club doors, urging men to step within, smiling with well-oiled cheer. I snapped a photo of a woman in one doorway who appeared to be clad in little more below the waist than a strategically placed patch, and as I walked on, a young man followed me, calling out, “Hey, I saw you taking the picture. You want to hook up with any of them?”

“Thank you, sir,” I answered, “but I’m too old.” He laughed at that and retreated.

In New Orleans, almost anything illegal that isn’t objectively dangerous is tolerated, as are the modesties of anyone not wishing to participate. It is actually this mutual respect among those who indulge and those who do not that gives the city its nickname The Big Easy.

In New Orleans, the city that never changes much, change came involuntarily when Hurricane Katrinaflooded many of the residential districts built in the last century. (The historic part of town, having been constructed above sea level by our pragmatic ancestors, was largely spared.) My high school never reopened after it dried out, and it was recently pulled down. I was back
home now for my 40th high-school reunion; the party favors that night were bricks rescued from the rubble.

Nearly a half million people lived in New Orleans 20 years ago; today it is about 360,000, the result of a slow decline made rapid by a cataclysmic flood. It used to seem that the only French word unknown to locals was entrepreneur, but the city has recently and surprisingly become an incubator of startups, reportedly with about 30 percent more than the national average.

Historically, New Orleans was also never fond of the tourist businessthat now sustains it, but even before “the storm,” as New Orleanians refer to Katrina, the city was becoming America’s Venice -a former mercantile capital reduced to preening in gaudy local color for the amusement of outsiders. There is still an active port, but the once-important World Trade Center of New Orleans, a midcentury tower with a revolving restaurant on its roof, stands vacant. All three of the local department stores that anchored Canal Street (downtown’s main street), have been repurposed -two as hotels, and the other, Krauss (founded by members of my family), as a condominium.

I have not lived in New Orleans since I was a teenager, and neither has my friend and highschool classmate “Dr. T.,” also in for the reunion. But New Orleanians can somehow spot fellow citizens at sniper-rifle range, and we were treated throughout with that special, knowing warmth that the city offers its native sons. Cradling an au courant restaurant list supplied by a worldly friend who makes New Orleans his second home, Dr. T. and I set out in pursuit the best in local cuisine.

Its French traditions skillfully husbanded, New Orleans cooked well even back when America thought that steak and lobster were the best a restaurant could offer. On Fridays, Galatoire’s is crowded and noisy at lunch. On seating Dr. T. and me in the main room, the hostess asked for my choice of waiter; that is because a regular guest will adopt, and remain loyal to, his favorite among the servers. I had to admit I had moved away and was out of touch, but our designated waiter, Peter Chavanne, was quite charming, recommending a staple dish, the chicken Clemenceau, which involves, in the form I ordered, chicken breasts, petit pois, potatoes and a pitcher’s mound of butter.

Many phrases in town start with “only in New Orleans,” and you can say that about Galatoire’s that day. The crowd was festive, and despite the summer day’s characteristically brutal heat and humidity, at least one third of the men were in jackets and ties -because that is how we do things in New Orleans, “casual Friday” or not. Peter clinked a glass with a spoon and called out for all to wish former Gov. Edwin Edwards and his wife a happy first anniversary. One man booed, but the rest drowned him with cheers. They sang congratulations to the melody of “Happy Birthday” to a politician who, in true Louisiana style, had not been out of federal penitentiary (on a racketeering conviction, of course) for a week before he had married a woman 51 years his junior.

In New Orleans, counting calories is gauche, and fat grams are theoretical objects that only concern particle physicists. I asked Peter for, and was told I could not have, a skim cappuccino.
Galatoire’s is on Bourbon Street, which, per my experience with the affable pimp, is about as tawdry a road as exists on America’s tourist map. By day, Bourbon Street, and indeed the rest of the French Quarter, can appear, depending on your point of view, relaxed or just badly hung over. After lunch, Dr. T. and I stoppedfor early live blues at a bar on Decatur Street, and then we plucked from the windscreen the parking ticket we got for failing to feed a non-existent meter. (In New Orleans, you grow up expecting that sort of thing.)

Whenever you go inside Bayona, which is owned and run by Susan Spicer, a local celebrity chef, you feel as if you are in a cradle of fine dining. Saturday is light-lunch day, and mine started with grilled dates wrapped in prosciutto (which made them look like shotgun shells, giving new meaningto the phrase “burst of flavor”) and served on a farro salad. Spicer has worked several dishes around hanger steak; this time, it was chopped and placed within a bed of chayote squash succotash and a tomatillo salsa. After the mango jalapeno sorbet arrived, with its yin and yang of flavors carefully intermingled, I again asked for a skim cappuccino. Again -no chance.

On Sunday, the Court of Two Sisters has its signature jazz brunch in its spacious, secluded courtyard, reached though an archway fronting onRoyal Street. The omelet maker carried on a lively dialogue with his customers, sending eggs and fillings airborne as he worked his pans. The turtle soup was spicy in a New Orleans way -just enough to make you feel it, not so much that it lingers with you, and always with an elegance that reminds you how spicing a tingling dish is a small and almost inexplicable art. (Our waitress reported that the restaurant does indeed stock skim milk for its cappuccinos -it was just fresh out at the moment.)

At The Presbytere, a museum next to Saint Louis Cathedral, in the French Quarter, we took in an exhibition devoted to the sorrow of Katrina. We spent a good bit more time at the National World War IIMuseum, which is what a couple of guys get to do when not traveling with their wives. At the gift shop, I got the idea of buying an inert hand grenade as a souvenir, but the cashier confirmed my suspicion that, at the airport, the TSA might take issue with my purchase.

By the time we got to Cafe du Monde for a late snack, I gave up worrying about my calories and other inconvenient units of measurements and had three beignets -triangular fritters, served warm and all but buried under confectioner’s sugar, that those of us from New Orleans lovingly, and perhaps bemusedly, call doughnuts. I ordered coffee with chicory, which adds a bitter note that out-of-towners might experience on a dare but which, at the cafe, you do not lightly omit if you are a local. Dinner was at the Gumbo Shop, where we each ordered variations on gumbo, the soup that is one of the signature dishes of New Orleans and can often be a meal in itself.

For our final lunch, I suggested to Dr. T. that we disappear off the tourist track and go to a beloved old haunt at the edge of the Garden District, The Camilla Grill. From the nearest parking lot, we followed a young couple with an infant and could smell the frying grease before the front door opened. When it did, we found every stool taken at the long, curving counter.

Age changes perspective like nothing else. “You know what?” said Dr. T. “Let’s go to Commander’s Palace.”

Commander’s Palace sits in the middle of the Garden District, not far from St. Charles Avenue, along which the street car still runs and where you find many of the finest houses in this, the district where Americans who did not want to mix with the French Creoles madetheir homes. Just behind it is Magazine Street, once tough and working class and now undergoing a surprising renaissance, with new restaurants and colorful shops.

Although it would soon be full, Commander’s Palace graciously took us without reservations, and our waitress gently steered me to low-calorie favorites such as a rich and delightful hot-andsour-style vegetable soup and a dessert built around a subtly complex honey melon basil sorbet. And then came the coda: Not only does the restaurant offer skim cappuccinos, but fat-free milk was in stock, and the espresso machine was ready for action. Our waitress served it -the perfect way to end a dining tour of my still untroubled former home town.