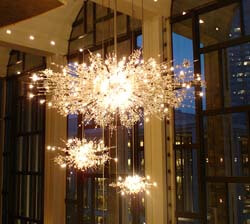 NEW YORK, 25 SEPTEMBER 2008 – Investment banks were either imploding, restructuring or surrendering their independence, stocks were falling and Congress was debating an emergency bailout package for newly penitent financiers, but the night had come for the opera season to open, so good fortune or bad, everyone put on his party clothes and got to Lincoln Center by 6:30. The last time I’d done that, I’d hired a car service, but in light of the current situation, I took the Shuttle to Times Square and connected with the No.1 train to West 66th Street. Travel Tip: if you’re running toward a crowded New York City subway train as the doors are closing, but you’re wearing a tuxedo, people will let you in.

Maybe it was the financial climate or just the fact that much of the plaza at Lincoln Center was closed off, being again under repair, but there was a feeling of confinement outside the Metropolitan Opera House, and the mood was subdued. People in dinner clothes stood quietly at the barriers lining the red carpet and on the balcony above, holding Champagne flutes, staring this way and that, looking for – no one was apparently sure who. A television camera propped on the New York State Theater’s balcony moved like the neck of a hungry giraffe as prominent people came down the carpet in small, well-spaced clusters.

Someone spotted John Lithgow as a finely dressed older couple next to me talked about the financial markets. The man wore a tuxedo and a white silk vest across which crawled a fragment from the score of Don Giovanni ; he said he had been out of equities entirely, which may have accounted for his relaxed disposition. In contrast, the investment bankers, hedge-fund managers and other financial types who form the cutting edge of the city’s economy are lately looking rather nicked and blunted.

Such are the times that people who bought benefit tickets months ago are not using them, but no one was surrendering his right to participate at the Met’s Opening Night Gala. The scalpers, readily distinguishable by their slovenly dress, had trouble finding tickets to buy and resell. A very pregnant blonde in Alpine pigtails stood in a white-and-black floral Michael Kors gown big enough to enclose the late Luciano Pavarotti; her condition wasn’t going to stop her from using that ticket, even if she’d outgrown the seat it gave her license to occupy. A young man in black patiently held up a fist full of dollars to exchange for a ticket, but he was having no luck. All he got for his trouble was the opportunity to do a favor for a group of nine attractive women by taking their picture for them.

Accompanying me this evening was an opera buddy I know as Ken the Socialist. Ken is rather a scholar of opera, but he is prone to sending e-mails arguing (for example) that Wagner, long cited as a proto-fascist, was really a proto-Leninist. I found him tonight right at the front of the barrier to the red carpet, next to his lovely wife, Mrs. Socialist. For day, the good Marxist wears combat fatigues and a well-accessorized bullet belt, but for evening, like Ken, he wears a finely tailored tuxedo and a white silk scarf.

“I’ve seen Barbara Walters, Jane Fonda and other people that I should know if I were in your milieu,” he replied. “The point of La Dolce Vita is the degradation of the people who live like Anita Ekberg, who danced in the Trevi Fountain in Rome. It’s a spiritually empty existence which Fellini was decrying in his movie, and it’s the investigation into that degradation that causes the film to be on the all-time top 100 lists.”

“Ken, if you play that scene in the Trevi Fountain in slow motion,” I said, “you’ll see that there’s a lot of beautiful degradation going on.” I left him to watch for Henry Kissinger’s arrival so I could check on the fourth member of our party, who we will know here only as The Lady in Black. She answered from Park Avenue, saying she was still trying to find a cab.

It got noisier as 6:30 approached, the sun reflecting from a building across the street, casting a red glow upon the crowd. The arching double staircase within the opera house and the balcony outside filled with well-dressed people, milling around, checking out the scene.

Perhaps because a broadcast that would take the event to some five hundred cinemas internationally required buffer time, the crystal chandeliers rose and dimmed late – just as The Lady in Black slid into her seat beside me, surrounding eyes catching her beauty in the fading light. She was brilliantly dressed in a black gown with a train that I and about one hundred strangers would trod upon during the course of the evening.

James Levine came out, to great applause; Met audiences are showing a new love for him since his return to the podium following the removal of a kidney. We all stood for the national anthem, the man next to me warbling in a bass that sounded like we did when, as kids, we used to talk to each other while underwater.

The hook this year was to feature the soprano Renée Fleming in three separate pieces, each of them representing the distinctive styles of Italian, French and German opera, respectively, and, not incidentally, her mastery of all. The evening opened with the second act of La Traviata (Verdi), moved to the second act of Manon (Massenet) and concluded with the final scene from Capriccio (Richard Strauss). The Met and its audience are more conservative than European counterparts, but with a twist that any opera audience would appreciate, and in keeping with the trend to move clothing design from the list of crafts into the shorter list of the fine arts, the costumes that Ms. Fleming would wear for each of the pieces would be, in order, by Christian Lacroix, Karl Lagerfeld and John Galliano.

The orchestra, hand polished by Mr. Levine over the years, played with sonorous precision, and Ms. Fleming gave passion and elegance to her role as Violetta in the Verdi piece. As Alfredo, Ramon Vargas was a teddy bear full of charm and immaturity. Thomas Hampson was particularly stiff-necked as Alfredo’s father, Germont, but it is a hard role to land correctly – in a scene hard to make real. (Germont has come to convince Violetta to give up her scandalous affair with Alfredo so he can marry off his daughter, and Violetta, who had never heard of the girl, goes along with it.) As the text flashed across our electronic subtitles, giggles arose from nearby, proving again that opera should be heard, not read. The time I recall seeing the scene pulled off most affectingly at the Met, a member of the audience had suffered a fatal heart attack in the middle of it – which may have altered the performance or at least my perceptions of it.

Galas are different from most nights at the Met. The clothes are better, people get their pictures taken by the media and each other, and the intermissions are as consequential as the performances. Patrons and members of the Opera Guild get access to the Eleanor Belmont Room, which serves as their clubhouse. I should have guessed that Ken the Socialist was a member of the club. On my way in, I brushed past Jeff Koons, and on my way out, I trailed Mayor Michael Bloomberg.

Everyone promenaded around the lower levels, pretending not to be noticed looking at the famous and, if reasonably famous themselves, trying not to be noticed trying to get noticed. I lost sight of The Lady in Black, who reappeared later to say that she ran into Tory (meaning the beautiful and talented Tory Burch) and apparently everyone she knows at a major financial news network – which is everyone at the network. The strap on The Lady’s Giorgio Armani evening bag broke, sending beads across the floor of the parterre lobby and men in tuxedos crawling on the floor after them like boys playing with marbles.

Ms. Fleming continued her display of excellence in the Massenet, and it was time for the second intermission/promenade. The Lady asked for Champagne, but the television crew had roped off the path to the nearest bar so that Martha Stewart could do an on-air interlude. When I finally made it to the bar by a flanking maneuver, I was told that Ms. Stewart had got the last of the Louis Roederer. Her half-empty bottle was right beside me, but with two television cameras rolling, it seemed an inopportune time to make my debut as a Champagne thief. Even great institutions have their weaknesses, and at the Met, it’s the house sparkling wine, which The Lady enjoyed well enough. She disappeared to greet a few dozen more people she knew, and it was on to the concluding piece, the final scene from Richard Strauss’s Capriccio. Ms. Fleming slipped into her German as effortlessly as she slipped into the knockout black, spaghetti-strap Galliano gown made for her role of the Countess. (I’ve seen women wear couture clothes for a single evening, but twenty minutes in public view must be record brevity for a Galliano.)

If opera going in America was ever merely an excuse to socialize and attract attention, that is long over. Opera is expensive and requires too much time seated in the dark with your mobile disabled to be something that you do just to be seen doing it. All levels of the house are therefore populated by devotees who know what they like and expect to get it. That can make for sometimes solemn evenings, but the gala is an exception; it’s a slow wade back into the pool of the repertoire, even as it also serves its wider function as the opening of the social season.

Events conspired to make this a more subdued year than most, but things can’t be too bad if Martha Stewart and others can drink the house nearly dry of Roederer. The traditional gala dinner was to follow, but that’s a story for another day.

Alan Behr is a partner at Alston & Bird LLP, where he practices intellectual-property law. He last wrote on Edgar M. Bronfman’s new book, Hope, Not Fear: A Path to Jewish Renaissance .